Nearly three decades after it was established, CNN has “discovered” the town of Mevo Horon – and declared it an “illegal settlement.”

Calling the CNN offices in Jerusalem, Tiar was greeted pleasantly, but quickly got to the point, asking a supervisor if they did not do any fact checking before broadcasting their stories. “How can you say that Mevo Horon is a new settlement? I myself have been living here for 32 years!”

The apparently unfazed person on the other end of the line did not deny that there had been an error – and tried to tell her that she was wrong about the dates herself. “He asked me if I was sure that the town had been here for three decades – perhaps it was newer? Maybe it was established in 1988? For me it was clearly just another example of how much the media can be relied upon to tell an accurate story,” Tiar added.

The Swiss Railway Company didn’t like it but the Federal Court ordered them to put up a big anti-Israel Poster in Zurich’s main station. Then all of a sudden there were “stickers” on the box that gave counter message: 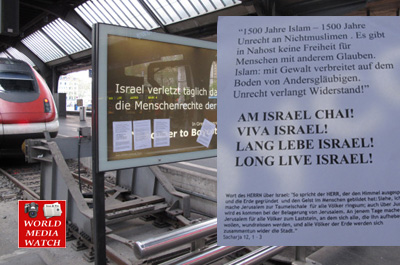 That first hit was followed by a second one. The stickers obviously were easy to remove and that seems to have led the same outfit to glue new stickers. Here are the pictures: 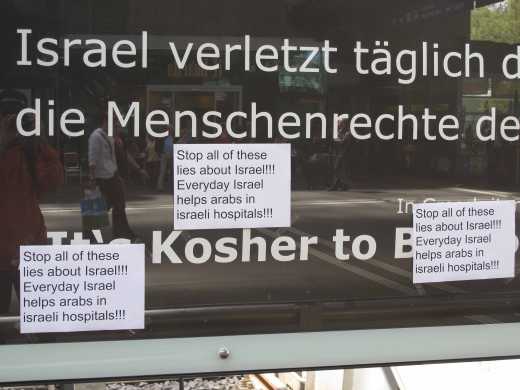 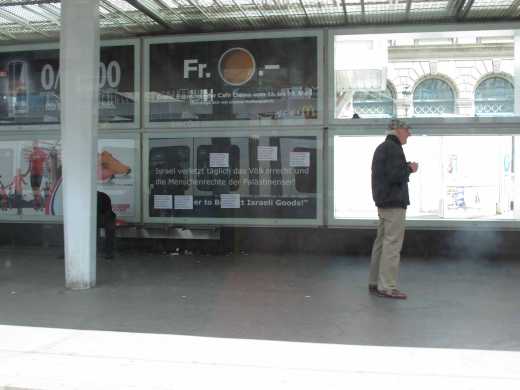 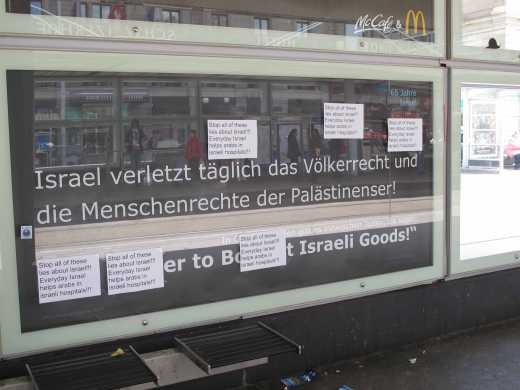 They didn’t spare Neue Zürcher Zeitung, the leading Swiss daily (and one of the bigger players in the anti-Israel crowd):

OPEN-CALL TO HATE JEWS
AT MAIN-TRAIN-STATION IN ZURICH, Switzerland.

The tracks are the symbol for Deportation and Extermination of the Jews in Europe!
Under the title: “65 years injustice to the Palestinians” a poster is hanging at the central station in Zurich/Switzerland since one week. How crude to put it at the end of the rail! It’s anti-Semitic and defaming the Jews. The Federal Supreme Court of Switzerland declares it as freedom of opinion.
”We are obliged according to the Federal Court judgment to hang out these posters”, says a spokesman of SBB (Schweizerische Bundesbahn). As long it is not clarified if the poster is allowed to hang legally there, so far the agitation against the Jews are published at the main station in Zurich. 75 years ago, it was said: (Deport) “Jews TO Palestine!” Today same people proclaim: “Jews OUT of Palestine!” Has something changed?
In which world we live actually? The Iran takes over the chair for the UN Conference on Disarmament – in spite of the sanctions because of the nuclear program and its support of terrorists and mass murderers. In Syria, Assad still massacred his own people, you will be stoned in Saudi Arabia, turkey journalists are arrested, as well journalist in the palestinian self-government areas. What happened to the Universal Human Rights? Did they changed into the “Cairo Human Rights”

So You Want to Boycott Israel? Mister Stephen Hawking?

Get the secret tips you won’t find anywhere else!

Guaranteed to end the occupation now!

Suha Arafat: The 2000 Intifada Was Premeditated, Planned by Arafat

Suha Arafat:
The 2000 Intifada Was Premeditated, Planned by Arafat

Pallywood during Pillar Of Defense:

VIDEO: Hamas Leader Khaled Mash’al: We Will Not Relinquish an Inch of Palestine, from the River to the Sea

VIDEO translated by Memri TV: Hamas Leader Khaled Mash’al:
“We Will Not Relinquish an Inch of Palestine, from the River to the Sea”

Mosab Hassan Yousuf, son of Hamas leader of West Bank Sheik Hassan Yousuf talks on T.V and as an Palestinian Arab Muslim claims he supports Israel because he is righteous and knows through his religion and history whose land it really belongs to, the Israelis.

He exposes all Arab lies against Israel and criticizes Islam for the hatred it teaches since he experienced it when he was a young boy. He very well admits the Arabs don’t want peace, just hate, war and fight while Israelis are striving for peace. Thank you Mus’ab Hassan Yousuf you are a righteous Arab and are respected for spreading the truth, not Paliwood lies.

The Middle East Problem in 5 Minutes by PragerUniversity

Why is the Middle East Problem so intractable? Dennis Prager, nationally syndicated talk show host and best-selling author, answers that question in this thought-provoking video course.

Samaria: The Heart of Israel

The November 2012 conflict in Gaza:

What happened and why, Israel’s & Hamas’ strategies, and the role of the media. Compiled by Nevet Basker from  www.BroaderView.org

VIDEO by Danny Ayalon: Israel Palestinian Conflict: The Truth About the “West Bank”

Israel’s Deputy Minister of Foreign Affairs Danny Ayalon explains the historical facts relating to the Israeli Palestinian conflict. The video explains where the terms “West Bank”, “occupied territories” and “67 Borders” originated and how they are incorrectly used and applied.

VIDEO: The Truth About the Refugees: Israel Palestinian Conflict

The Truth About the Refugees:
Israel Palestinian Conflict

Israel’s Deputy Minister of Foreign Affairs Danny Ayalon explains the historical facts relating to the issue of refugees in the Israeli Palestinian conflict. The video explains the reason there are still refugees after more than six decades is because of Arab leaders’ recalcitrance to accept their brethren and the United Nations which created a separate agency with unique principles and criteria. The video also highlights the issue of the Jewish refugees who were forced out of their homes in the Arab world, and were subsequently absorbed by the State of Israel.

Is Israel an Apartheid State? Dennis Prager provides the definitive answer. He also explains why some people ask it. This question would be absurd if people didn’t take it seriously. Their motive is often disingenuous. They want to de-legitimize Israel by trying to link it to Apartheid South Africa. Visit http://www.PragerUniversity.com to learn more about the Middle East Conflict and other courses you don’t want to miss.

In the name of Pirouze Parsi (Ferdowsi) and Kasravi the Great! | Censored/shadow-banned almost everywhere and prosecuted by German, Pakistani and Turkish courts

was so eine Perspektive ausmacht...

Gerardo
The Times of Israel